Our #EpicFail series continues, describing some of the most interesting and obscure failure mechanisms that we have encountered through our failure investigation work at R-TECH. This month we take a look at High Temperature Hydrogen Attack.

High temperature hydrogen attack (HTHA) is a phenomenon which occurs across a variety of industries, particularly in the petrochemical industry. HTHA is associated with a loss of tensile strength and ductility and is preceded by a period of time where no noticeable changes in properties are detectable by non-destructive techniques. Consequently, catastrophic failure can occur without prior warning signs. A tragic example of this is the recent explosion and fire in April 2010 at a refinery in Washington State, USA where 7 lives were lost was a consequence of HTHA in a heat exchanger in the Naphtha Hydrotreater unit.

HTHA occurs in carbon steels and alloy steels upon exposure to elevated temperatures and pressures. At high temperature, hydrogen gas molecules dissociate at the steel surface to atomic hydrogen which readily diffuses into the steel. The hydrogen reacts with dissolved carbon and with metal carbides to form methane gas. The methane molecule is much larger than the hydrogen atom and therefore too large to diffuse through the steel. As a result, internal methane pressure builds up, leading to bubbles, cavities and fissures which may coalesce to form cracks (see Figure 1). At higher temperatures, the dissolved carbon diffuses to the steel surface and combines with atomic hydrogen to form methane. This leads to surface decarburisation which affects the overall material strength. 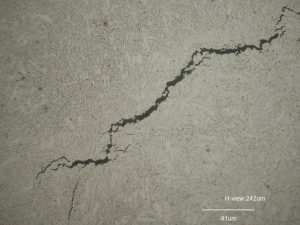 Figure 1 Cracking due to HTHA

Early stages of HTHA damage is usually only noticeable using destructive metallography since the phenomenon generally occurs sub-surface and is too fine to be detected using conventional NDT methods. This is recognised by voids/fissures at the grain boundaries associated with decarburisation, see Figure 2. 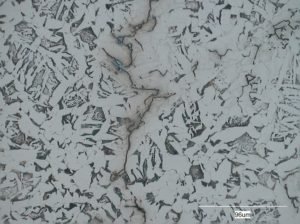 HTHA is generally of particular concern at temperatures above approximately 260⁰C and hydrogen partial pressures above 689kPa. Various industries use Nelson Curves to predict the susceptibility of various materials to HTHA damage. Elements that stabilise carbides, such as chromium and molybdenum, increase resistance to HTHA and this is reflected in the Nelson curves. Although these curves are useful for determining the approximate limits of hydrogen partial pressure and metal temperature, there have been instances where HTHA failures have occurred in carbon steels operating below the applicable Nelson curve which was the case for the incident at the refinery in Washington State in 2010.

Susceptibility to HTHA increases in areas of high stress or stress concentration since hydrogen preferentially diffuses to these areas. This can lead to HTHA damage in components operating below the Nelson curves. Isolated areas of decarburisation and fissures are often found adjacent to weldments. Fissures tend to be parallel to the edge of the weld rather than the surface due to the presence of residual stress. Fissures in this direction can form into through-thickness cracks and are therefore significantly more detrimental.

Would you like to know more about our Failure Analysis services? Contact us today to find out more!