CASE STUDY: Failure Analysis of a Flange from an Alkylation Service

R-TECH Materials received a section of flange taken from an alkylation unit, with a request to determine the cause of failure. The material grade of the flange was advised as being ASTM A106 grade B carbon steel. 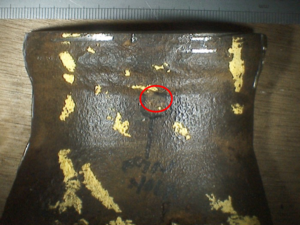 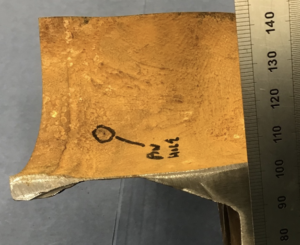 An area of perforation was present close to a circumferential weld, Figures 1 and 2. The internal surface of the flange exhibited significant metal loss and severe thinning associated with a yellow-coloured corrosion product. Upon sectioning, the degree of thinning was clear, Figures 3 to 5. 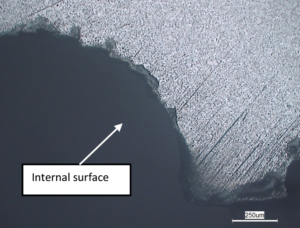 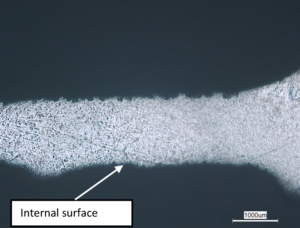 The deposit associated with the internal surface was found to predominantly consist of oxygen, fluorine and iron. Small amounts of silicon, phosphorous, chloride, sulphur, calcium, manganese were also present.

The nature of the metal loss and the presence of significant levels of fluorine indicated that the failure was attributable to hydrofluoric acid corrosion. Carbon steel forms a protective fluoride scale in dry (anhydrous), fresh HF, which enables a very low general corrosion rate in anhydrous HF. HF containing dissolved water (rich HF) is created when the fresh acid has picked up water as it encounters residual moisture in the feed and isobutane entering an HF alkylation unit [1]. This water-bearing acid can still form a tight protective fluoride scale on carbon steel but can be impacted by the water content, which if operated at more than 1.5 wt% can increase the general corrosion rates [1]. Higher temperatures also increase the general corrosion rates; corrosion by HF generally occurs in operational conditions exceeding 65°C.

Rich HF when subject to a phase change (vaporization and condensation), can cause significant localised corrosion of carbon steel because the phase-changing rich HF reaches a very corrosive azeotropic concentration (an azeotrope is a constant boiling temperature mixture of liquids) [1].

Oxygen contamination also increases the corrosion rate of carbon steel. The presence of oxygen destabilises the protective fluoride scale and converts it into a voluminous non-protective scale [1]. Corrosion rates can also increase in the presence of sulphur; small amounts were detected in the corrosion product close to the failure in isolated areas [1].

The RE content of the material was 0.39% which is higher than the recommended limit, which would have exacerbated corrosion rates.